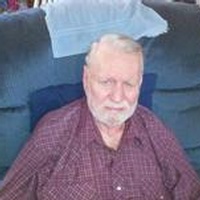 Ben R. Thompson, Age 82, of Mt. Pleasant, passed away on December 11, 2012 in Mt. Pleasant.
Graveside services will be held on Thursday December 13, 2012 at 2:00 P.M. at the Nevill's Chapel Cemetery with Bro. Clint Davis Officiating. Pallbearers will be Ben Thompson Jr., Alonzo Thompson, Duane Hudson, Isaac Brimhall, Tim Hicks, and Joseph Gregory, Ben Thompson III will serve as an Honorary Pallbearer. Visitation will be held from 12:00 till 1:30 P.M. prior to the service at the Curry-Welborn Funeral Home.
Mr. Thompson was born on January 9, 1930 in Mt. Pleasant TX to Algie and Anna Maxey Owens Thompson. He retired from the City of Mt. Pleasant and was a veteran of the U.S. Army. Mr. Thompson married Samanthia Ann Gregory on April 14, 1967 in Athens TX.
He is survived by his wife, Samanthia Thompson, his children, two daughters; Mary Brimhall and Sendy Hudson, and two Sons; Ben Thompson and his wife Jeton, and Alonzo Thompson. He is also Survived by his sister, Lina Mae Reynolds and 12 grandchildren and 2 great grandchildren along with numerous nieces and nephews.
He was preceded in death by his parents, Algie and Anna Maxey Thompson, his daughter, Nancy Hicks and a step brother Willie O'Bier.

To order memorial trees or send flowers to the family in memory of Ben Thompson, please visit our flower store.