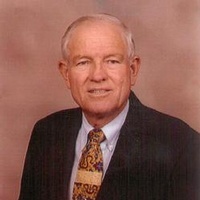 Clinton Marshall Evetts, age 87, of Pittsburg, formally of Clarksville TX., passed away on Friday, April 21, 2017 in Pittsburg TX., Graveside services will be held on Monday, April 24, 2017 at 11:00 A.M. at the Fairview Cemetery in Clarksville TX with Rev. Mike Kessler and Rev. Shane Webb officiating. Clinton was born on November 28, 1929 in Medicine Lodge KS., He graduated from Clarksville High School and attended Paris Junior College, and he married Rosemary Marchbanks on June 11, 1955 in Clarksville TX. Clinton Served in the United States Navy and Active Naval Reserve for Thirty-Nine years, and retired with thirty years of service with the United States Postal Service. Clinton was very active in the Republican Party and worked tirelessly for republican candidates. He attended Trinity Baptist Church in Mt. Pleasant and was a member of the American Legion and the Camp County Republican Party.
He is survived by his wife of Sixty-One years, Rosemary Evetts, a sister, Lou Ella Humphrey and husband Sam, nephew, Dr. Curtis A. Evetts, niece, Janet Franklin and numerous great nieces and nephews.
He was preceded in death by his parents, Tom and Lura Marshall Evetts and one brother, Curtis Lee Evetts.

Memorials can be made to the Titus County Animal Shelter in his honor.

Services under the direction of Curry-Welborn Funeral Home.

To order memorial trees or send flowers to the family in memory of Clinton Evetts, please visit our flower store.