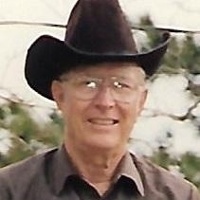 Edmond Kyle Hammond was born April 10, 1924, six miles south of Brashear, Texas in Hopkins County. He attended the Divide Community School until he was 16, when he moved to Orange, Texas. He worked there in a shipyard for six months.

There was a shortage of farm labor available during the war, so Ed’s father asked him to come home and help him on the family farm. Ed was granted a six month Farm Labor Deferment, but in November of 1943, he went to a recruiting office in Sulphur Springs to enlist in one of the branches of the armed forces. He had no preference, but the decision was made for him when the Marines recruiter in Sulphur Springs, TX pointed to him and said, “I Want You”. This decision placed him in two of the fiercest and costliest battles of WWII: Peleliu and Okinawa. After Ed was honorably discharged from the Marine Corps on March 5, 1946, he received his high school diploma, learned Morse code, and went to work for the Atchison, Topeka, Santa Fe Railroad Company as a Telegrapher and Agent in Clovis, New Mexico. This is where he met his bride, Margie Prather. They became husband and wife on November 16, 1955. In 1957, Ed and Margie moved back to Texas. Ed began working for Lone Star Steel and bought a ranch on the Morris-Titus County line where he and Margie made a home. Their family grew in 1962 with the addition of a son, Michael Curtis Hammond.

Ed was an accomplished musician, song writer, and writer of stories.

He was proceeded in death by parents, John Henry and Lottie Mae Hammond, his brothers Avery and Henry Hammond, his sister's Jewell Stracener, Melba Waters, and wife, Margie Prather Hammond.

He is survived by son and daughter in law, Michael and Linda Hammond, grandson and his wife, Josh and Christie Hammond, granddaughter and her husband, Heather and Culley Griffin, and four great grandchildren, Paige Grissom, Jeremiah Adams, Emma and Micah Hammond, and numerous nieces and nephews. In lieu of flowers, the family has asked for donations to Cypress Basin Hospice in memory of Ed.

Always a patriot, Edmond Kyle Hammond was proud to serve his country.

To order memorial trees or send flowers to the family in memory of Edmond Hammond, please visit our flower store.