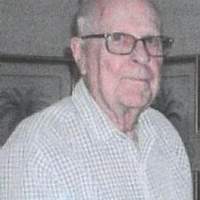 George was born on August 6, 1933 in Akron Ohio but raised in Ravenna Ohio. Met Shirley when she was still in school, 14 years old. They were allowed to date only two times a week, and he hadn't been going to church regularly. So in order to get in an extra date, he decided it would be good for the two of them to go to church together on Sunday nights. That summer, they were both saved on the same night. They were later baptized together and then got married on July 18, 1953 in Ravenna Ohio. They had three Children, around age 40, in October 1978, he was transferred with his job to Mt. Pleasant TX., where they lived ever since. When they moved to Texas, their youngest daughter Cheryl and her husband came with them. Within two years, their other two children John and his wife and Suzanne and her husband, and even Shirley's parents and Johns in-laws moved to Mt. Pleasant too. George Liked to work in his wood shop making things. Some of the things he made consisted of a large windmill, a lighthouse, and a wishing well, along with some nativity scenes for the front yard. He loved camping, boating and fishing and just being outdoors with his family. He was a quiet person but deep when it came to his beliefs. He always said he ‘knew he could never do anything right," but he just didn't know how many millions of things he actually did do right over the years. He was a faithful and loving husband and a wonderful father, grandfather and great-grandfather. He loved the Lord above all and showed it every day in how he cared for people.
George is survived by his son John McRobie and wife Lynn, Daughters; Suzanne Stacy and husband Keith, and Cheryl Reigstad and husband Dan, nine grandchildren, ten great grandchildren, two sisters in laws; Marjorie and Carl Conti, and Patricia Ruehr of Florida and numerous nieces and nephews.
He was preceded in death by his parents, Noble and Lillian Crane, his wife Shirley McRobie, one brother Wayne McRobie, three sisters; Helen Hostetler, Charlotte Love, and Janice Messner, son in law Stephen Hanuscin III and brother in law William Fritz Ruehr.

To order memorial trees or send flowers to the family in memory of George McRobie, please visit our flower store.