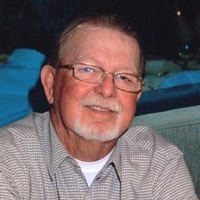 Harold Kenneth "Ken" Smith passed away unexpectedly on Tuesday, August 15, 2017 at the age of 75. Ken was born on July 21, 1942 in Charleston, West Virginia to Harold Young and Doris Swann Smith. He was raised in Mount Pleasant, Texas. Ken was married to his wife, Tobi, for 35 years and between them, they had 5 children. Ken was a natural salesman, quick witted and loved to tell stories. He never met a stranger. Ken enjoyed golfing most of his life which lead him to design and build Shadow Lakes Golf Course. The golf course was his labor of love. He called it his poor boy's dream.

He was preceded in death by his parents, H.Y. and Doris Swann Smith.

A memorial service is scheduled for 2:00 PM Sunday, August 20, 2017 at First United Methodist Church in Mount Vernon. The family will receive friends at the church immediately following the service. All are welcome to attend and celebrate Ken's life. In lieu of flowers, donations may be made in his memory to Alzheimer's Texas at www.txalz.org

Cremation services under the direction of Curry-Welborn Funeral Home.

To order memorial trees or send flowers to the family in memory of Harold Smith, please visit our flower store.