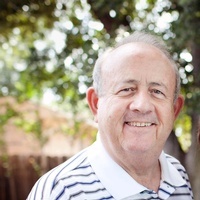 James Howard Spears of Mount Pleasant, Texas passed away on Sunday, February 10, 2019 in Tyler,
Texas.
Visitation will be held Friday from noon-1pm, service to follow at 1pm at the First Assembly of God
Church in Mount Pleasant, Texas. Burial will follow at the Woodman Cemetery in DeKalb, Texas.
James was born on August 19 th , 1946 in Gilmer, Texas to Duran and Ruth Patterson. He was preceded
in death by his parents, grandparents Pete and Grace Wyatt, and W.E. and Irma Patterson; and his in-
laws A.W. and Mildred Gilbert.
James is survived by his wife of 52 years and the love of his life Charlotte Spears “Always and forever,
until the 12 th of never”, his daughters Shirley Thomas and husband Brett (Lindale); Ruthie Gibson and
husband Scott (Rowlett); and his biggest fan daughter Caris Spears (Mt. Pleasant); grandchildren Holt
Thomas; Katie Thomas,; Miles Gibson; and Beau Gibson; sisters and brothers-in law Cassandra
Walding and Bobby (Pasadena) Karen McCaffety and James (Livingston), Kathy Loynes and Bob (Indian
Shores, Fl.); Ginger Lewis (Pasadena) and Robin Showalter (Meraux, La.); sister in-law Sally Carol
Hutchinson (Georgetown); brother in-laws Tony Gilbert (Waxahachie); and Danny Lewis and wife
Elaine (Hawkins); numerous nieces and nephews; cousins; and friends close as family.
James was a proud veteran of the U.S. Airforce and a graduate of the University of Texas at Austin.
He was a mentor to many, local business owner, a loyal and honorable man in all he did. He was the
best husband, Dad, and friend.

To order memorial trees or send flowers to the family in memory of James Spears, please visit our flower store.