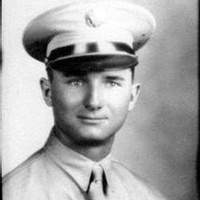 John Louis Powell, 92, of Sulphur Springs, formerly of Mount Pleasant passed away Friday, March 3, 2017 in Sulphur Springs.
Services will be held March 8, 2017 at 11 AM at Curry Welborn Funeral Home. Rev. Fred Lewis will officiate. A military burial by the Hopkins County Military Coalition will be at Forest Lawn Memorial Park under the direction of Curry-Welborn Funeral Home. Pallbearers will be nephews and grandsons.
Mr. Powell was born on November 27, 1924 in Foxworth, Mississippi, the son of Purcil and Vertna Thornhill Powell. He married Jean Cox Powell March 13, 1965. She preceded him in death on December 10, 2010. He became known to the world as Padue after receiving that name from his first grandson. He loved it so much he would introduce himself to others as Padue.
He is survived by his daughter and son-in-law, Shirley Burns-Francis and George Francis, two grandsons, Todd Burns and wife Mindi of Capistrano Beach, CA. and Brandon Burns and wife Kelly of Ft. Worth, two great-grandsons Max and Matthew Burns. He is also survived by 3 step-grandchildren, several step-great grandchildren, one brother, Charles Powell and sister Libra Coley and a host of nieces and nephews. He was preceded in death by his parents, brothers Wilford and Blakes, sisters Monti and Hertha.
He was one of the "Greatest Generation" who served in the 550th Anti-Aircraft, Battery D, 3rd Army, 4th Division. His tour included Normandy, Northern France, Rhineland, Ardennes and Central Europe. He received the good conduct medal, the European African Middle Eastern Theater Medal along with several others. He was a life time member of the VFW. After he left the military he worked all over the world, doing seismograph work in Saudi Arabia, Israel, Argentina, and Canada finding oil for the world. That work brought him to Texas where he met Jean and stayed even though a part of his heart stayed in Mississippi. He retired from the Mt. Pleasant Dorchester Refinery.
Visitation will be one hour prior to the service at the funeral home of Curry-Welborn. In lieu of flowers, memorials may be made to Hopkins County Military Coalition or Scottish Rite Hospital.

To order memorial trees or send flowers to the family in memory of John Powell, please visit our flower store.