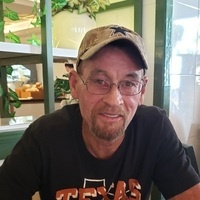 Kenneth “Kenny” Wayne Wilbanks was born in Mt. Pleasant, TX on November 12th, 1964 to Alice (Ottinger) and Bobby Wilbanks. The family moved to the Dallas area where Kenny was raised and spent the majority of his adulthood. In his youth during the summer, you could find Kenny spending time at Granny’s and Uncle Steve’s usually causing some sort of mischief. Kenny’s hard work and dedication in the construction field propelled him to rise to the position of jobsite superintendent. A position he was proud to hold.

Kenny was a funny guy and a family man, always putting family first. If you had the pleasure of being loved by Kenny, you knew you were loved to your core. “Loved you then, loved you still. Always have, always will.” However, you better watch out because you never knew when the next prank would be on you. Good luck trying to locate a picture of Kenny without a “funny” face or bunny ears.

You never knew where you would find Kenny from quietly reading a western, tending to his animals or lending an ear to a friend in need. Kenny was a giver of time, money and spirit. He hardly talked about this part of himself but was evident in his actions – mission trip to Guatemala, donating food to the food pantry, spending many weeks helping seniors with repairs to their home, anonymously leaving money for homeless people and mentoring numerus struggling youth.

Kenny met the love of his life, Jenora and the pair was continuously on the go making memories. Always an early riser, Kenny was famous for saying, “we’re burning daylight”. This led to many spontaneous adventures watching the sunrise in various parts of Texas. The time they had together was jammed packed and truly treasured. They could be found flying kites at Loy Lake, playing the slots at the casino, going to various sporting events or just taking a drive to talk and listen to music. He even convinced her to watch a couple of John Wayne movies since they were his favorite. A proud Texan, Kenny loved showing Jenora his favorite places, especially the Palo Duro Canyon and Keller’s Drive-in. They had a lot of fun times including their week trip to Mexico. Oh, the stories that came out of that trip.

Kenny wanted to return to his “home” of Mt Pleasant, the couple did so this past November. The Lord called Kenneth Wayne Wilbanks home on April 24th, 2020. Kenny was the life of the party, beloved by his family. He will be dearly missed.

A memorial service will be held at a later date.

To order memorial trees or send flowers to the family in memory of Kenneth Wilbanks, please visit our flower store.