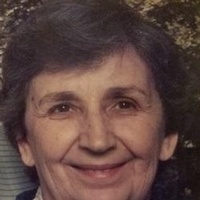 Lois E. Pepper, age 88, of Argyle TX, formally of Mt. Pleasant TX, passed away on December 29, 2018 at Medical City of Denton. Graveside services will be held on Thursday, January 3, 2018 at 2:00 P.M. at the Forest lawn Memorial Park in Mt. Pleasant TX with Dennis Hogan officiating.

Lois was born on April 24, 1930 in Braddock Pennsylvania to Elmer and Irene (Cenna) Ratica. She was a Nurse who also served in the U.S.A.F as a Captain, where she met her husband Gary Pepper and they were married.

She was preceded in death by her husband, Gary Pepper, and two sons; Dustin Pepper and Mark Pepper, her parents, Elmer and Irene Ratica, her sister, Norma Van Meter and her brother, Regis Ratica.

To order memorial trees or send flowers to the family in memory of Lois Pepper, please visit our flower store.