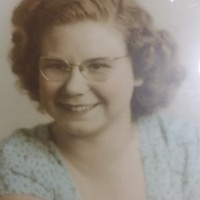 Friends and family mourn the loss and celebrate the life of Mary Helen Stewart. Helen departed this life on April 13th, 2020. She was born to Eddie and Lorine Blagg on October 20th 1926 in Ponta, Texas.

There will be a graveside service held for immediate family and close friends on Thursday, April 16, 2020 at 2:00 P.M. at Forest Lawn Memorial Park. Her body will lie in state at Curry-Welborn Funeral Home on Wednesday, April 15, 2020 from 8:00 AM to 5:00 PM. Due to the unforeseen circumstances there will be a family led memorial service set at a later date.

She married Albert Loyal “Ab” Stewart, of Prescott, Arkansas on December 7th, 1944 in Monticello, Mississippi. Together Albert and Helen traveled throughout Louisiana and Eastern Texas “following the oil dereks” where “Ab” worked as a roughneck for Hinton Oil, counting the companies owner as a close friend and eventually settling in Mount Pleasant where Albert worked until retirement in the Talco Oil fields. Helen kept careful record of each move as the couple traveled and life long friendships were made with several individuals and families in Talco, Sugarhill, Argo and the Harts Bluff area. Albert and Helen were members of Maple Springs Baptist Church in Sugarhill, Texas.

Helen held a special place in her heart for baseball at any level, having broken a finger playing first base as a teenager, as well as “old timey country and western music” in which she could boast a nearly encyclopedic knowledge of, if she were inclined. She was a social butterfly throughout her entire life.

To order memorial trees or send flowers to the family in memory of Mary Stewart, please visit our flower store.