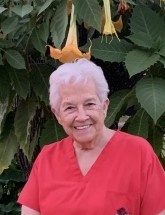 Melba Sue McCafferty Preston born July 30, 1926 went to be with her Lord and Savior on January 1, 2021. She was the daughter of Joe and Barbara McCafferty of Hartford AR. Preceding her in death was her husband, Neal Preston Jr., and son Frank Preston, as well as eleven brothers and sisters.

She was a member of South Jefferson Baptist Church

A graveside service will be in Arkansas at a later date.

To order memorial trees or send flowers to the family in memory of Melba Preston, please visit our flower store.