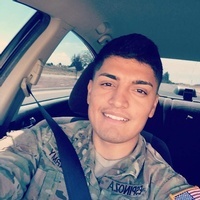 Roberto Jr. was born on September 18, 1992 in Mt. Pleasant TX. To his parents Roberto and Ana Espinoza, he was a graduate of the Mt. Pleasant High School class of 2011, he served in the U.S. Army and was an oil field worker for ProFrac Services.

He is preceded in death by his grandparents; Alejandrina Jimenez and Amparo Martinez and a cousin, Fatima Sanchez.

To order memorial trees or send flowers to the family in memory of Roberto Espinoza Jr., please visit our flower store.