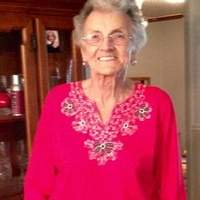 Shirley J. Letot, 91, of Mount Pleasant, passed away Friday, April 22, 2016 at Mission Manor nursing home in Mount Vernon. Mrs. Letot was born September 1, 1924 in LeCompte, LA to Clarence A. and Beulah Johnson Strother. She attended and graduated school from Del Rio High in 1941. In 1948, she married John R. Letot in San Marcos, TX. Mr. and Mrs. Letot were long time residents of Mount Pleasant, having moved here in 1963. Together they spent over 40 years raising their son and living a lifetime of memories. She worked at Millhouse Supply as a bookkeeper for over 20 years, where she met her best friend, Helen Hutson. Shirley was an active member of St. Andrews United Methodist Church for over 50+ years, also serving with the United Methodist Women Organization. Mrs. Letot had been a long time member of Retired Teachers Association and Fine Arts Club, as well. Her hobbies included playing cards with friends, attending movies, and of course, shopping. Above all, her greatest blessing and what brought her the absolute most joy was spending time with her beloved family. She adored her grandchildren and great-grandchildren, telling anyone who would listen stories about them. Her Louisiana family also had a very, very special place in her heart. Shirley was a loving, proud, dedicated wife, mother, grandmother, aunt and friend who will be missed by all who knew her.

She was preceded in death by husband John Raymond Letot and sister-in-law Kathlyn Strother.

Funeral services for Shirley J. Letot will be held at 10:30 A.M. Tuesday, April 26, 2016 at Curry-Welborn Funeral Home in Mount Pleasant with Rev. Kristin Bogart officiating. Interment will follow at Winfield Cemetery in Winfield, TX. Visitation was from 6:00-8:00 P.M. Monday evening at the funeral home.

Memorials in the honor of Shirley Letot can be made to the St. Andrews United Methodist Church at 2019 N. Edwards Ave. Mount Pleasant, TX 75455.

To order memorial trees or send flowers to the family in memory of Shirley Letot, please visit our flower store.