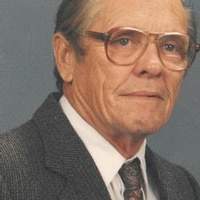 Walter "Nelson" Rieger, age 87, of Mt. Pleasant, TX passed away on Friday, September 30, 2016 at the Mt. Pleasant Healthcare Center where he and his wife resided. His funeral services will be held Wednesday, October 5, 2016 at 10:00 A.M. at St. Andrews United Methodist Church in Mt. Pleasant, TX with Pastor Krista Bogart officiating and interment will follow at Neville's Chapel Cemetery. Visitation will be Tuesday, October 4, 2016 from 6:00- 8:00 P.M. at Curry-Welborn Funeral Home.
Nelson was born on July 5, 1929 in Rotan, TX to Ocie Lee Rieger and Maggie Weems Rieger. He and his wife, of 69 years, were married on July 20, 1947 in Portales, NM. They moved to Hereford, TX where he owned his own plumbing, heating, and air conditioning business. In 1969, he and his family moved to Mt. Pleasant, TX where he continued plumbing until 1992. Then, he continued to work on his farm in the Chapel Hill area until his retirement. Before his health began slipping he was an active and faithful member of St. Andrews United Methodist Church.
He is survived by his wife Charline Russell Rieger, his daughter; M'Lette Ross of Waco, TX, two sons; Lanis Rieger and wife Ann of Linden, TX, and Lyndon Rieger and wife Sharon of Del Norte, CO, his grandchildren; Amber Ross, Justin Ross and wife Brittany, Jake Ross, Chance Grigsby, Jason Skelton and wife Celeste, and Buffy Martin, his nine great grandchildren, and one great great grandchild.
He was preceded in death by his parents and sisters; Zelda Kendrick of Mt. Pleasant, TX and Alta Hudson of Hereford, TX.
The Family has requested memorials, in honor of Walter Nelson Rieger, be made to St. Andrews United Methodist Church.

To order memorial trees or send flowers to the family in memory of Walter Rieger, please visit our flower store.